We recently completed a project to create e documentary piece to promote the life and work of C John Taylor. This is our Directors Cut. You can view the longer client version here

To create a short documentary style film about the life and work of the artist C John Taylor, drawing on  archive resources, to introduce a digital audience to his work.

C John Taylor was an entrepreneur, artist and poet based on Seil Island on the West Coast of Scotland near Oban. In his lifetime he grew his chain of Scottish gift shops to cover many Scottish locations. Yet he dd not primarily see himself as a businessman but rather as an artist. Having produced a large library of work, his surviving family decided that an online marketplace might be the best place to sell his work.

As such they were looking for a film which highlighted Seil Island, the locations he painted, his work and his legacy in terms of funds raised for the Royal Blind School in Edinburgh.

After initial phone calls to discuss their vision for the project, we were sent a large package full of archive material; CDs of his paintings, albums of poetry, books of poetry and even a cassette! Which was nostalgic, though necessitated the purchase of a cassette to MP3 convertor.

The aim was to try and find the exact location from which a number of his paintings were viewed, as the artist painted them. To do this, I did a few hours of desk based research using Google Maps and Streetview. It’s surprising just how accurate you can be using that. Going through this process would allow much greater efficiency in the production phase later on.

In May we scheduled a trip to Seil Island, arriving at 1am and hiking up to the hills overlooking Ellenabeich and Easdale Island. Pitching the tent up there allowed us to capture some timelapses and get some general visuals from a variety of perspectives, as well as just having the most spectacular location for a night’s kip it is possible to imagine. 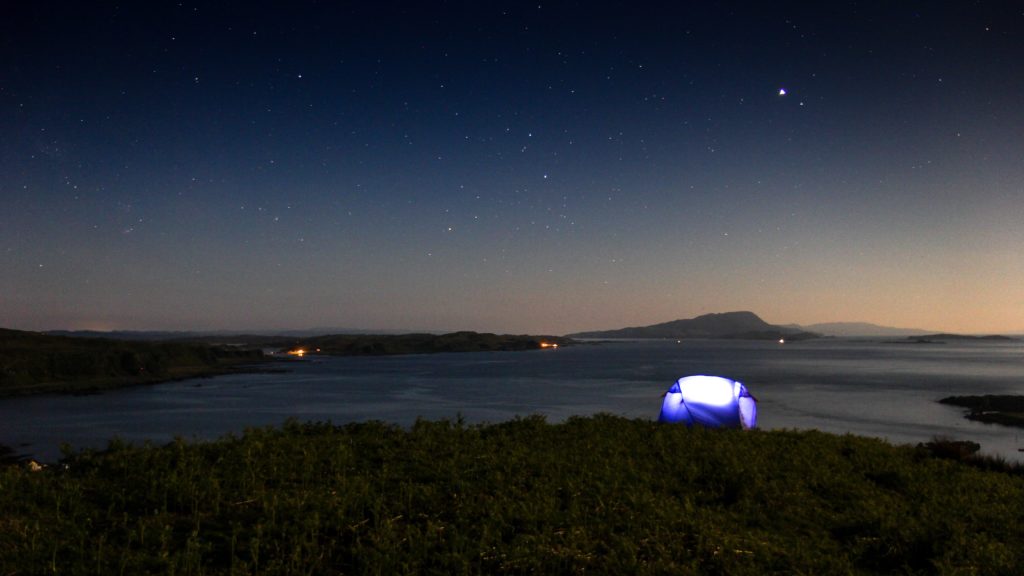 Between about 7am and 9am we filmed all the general visuals for the film and worked through about half of the most densely clustered painting locations from our spreadsheet, prior to meeting the client, Mr Taylor’s granddaughter Suzanne, at the old shop. The shop has since been sold and was being emptied for moving out but you could still get a sense of the buzz that must have been there when the coachloads of tourists used to visit. A quick brew and a pie for breakfast in the sun and we were off to hunt down more locations.

We then spent a, frankly, wonderful day touring Seil Island and Oban to film footage of all the painting locations and other good viewpoints. The summer of 2018 was a scorcher and my tan was well topped up by the end of it. Along with all the landscape content we also filmed a short interview on Oban harbour with William Harvie, concierge of Gleneagles hotel  to talk about the work of Mr Taylor and wrapped up with a couple of shots of cruise ships in the harbour in the evening light (to allude to the fact that Mr Taylor used to spend 3 months each year painting on cruise ships).

One of the discussions we had during that day was that it would be good to involve the School for the Blind, in Edinburgh, whom Mr Taylor and the business had supported with substantial sums over the years. The team there were fantastic and we conducted an interview with Davina Shiell, their head of communications, about the work of the school and the support of Mr Taylor. We also had the opportunity to film some b-roll in the school and it really is a fantastic facility.

This was quite a hard documentary edit to storyline, as there was no obvious narrative. But working through a sequence of archive footage to introduce him, then introduce the location, then the work of the artist, then the legacy before going back to wrap it up with a final icon view and a combination of a poem and a children’s choir singing his most famous song, seemed to be a good format. The client had referenced Loving Vincent as an inspiration, but budget didn’t allow for any real time spent in After Effects, so we used a cinemagraph app for the iPad to add subtle animation to the scenes. This was only really possible in paintings which had clouds or water.

Other than that, it was a fairly straightforward matter of editing it together. Using sound design of the waterfall to blend through to the water feature at the school was a good example of how good sound design is really the unifier in many a piece. Overall we’re happy with it. The reason for a directors cut is just to shorten it a bit and to cut quicker to the action, whereax the client version is more involved with setting the scene and introducing elements of his work which people will recognised who knew it e.g. bagpipe rendition of Islands of Beauty,

If you’d like to discuss making your own promotional film, then get in touch today.

Though Highland Arts is only just in the process of building a new website and getting their social media up and running, the film seems to have had a very good response since being published to Facebook, with around 6000 views at the time of writing. Not bad for a 6minute film about a little known artists distributed through a newly established Facebook page.

All other content courtesy of the estate of C John Taylor.

This website uses cookies to improve your experience while you navigate through the website. Out of these, the cookies that are categorized as necessary are stored on your browser as they are essential for the working of basic functionalities of the website. We also use third-party cookies that help us analyze and understand how you use this website. These cookies will be stored in your browser only with your consent. You also have the option to opt-out of these cookies. But opting out of some of these cookies may affect your browsing experience.
Necessary Always Enabled
Necessary cookies are absolutely essential for the website to function properly. This category only includes cookies that ensures basic functionalities and security features of the website. These cookies do not store any personal information.
Non-necessary
Any cookies that may not be particularly necessary for the website to function and is used specifically to collect user personal data via analytics, ads, other embedded contents are termed as non-necessary cookies. It is mandatory to procure user consent prior to running these cookies on your website.
SAVE & ACCEPT